Pentecostal Tabernacle was in God’s plan and His will. On August 31, 1991, Pentecostal Tabernacle Apostolic (PTA) became a reality.   Establishing this work was not an easy task, but while Bishop Russell was at work, his wife, Evangelist Lisda Russell who had just had major surgery and Minister George Williams, with an injured leg, helped to get a lot of the ‘paper-work’ ready for the opening.

YWCA Hartford, CT
​It first began with services that morning at the YWCA on Broad Street in Hartford, CT. The assembly consisted of eleven (11) adults and eight (8) children. Through the spiritual leadership of the Holy Ghost in our Pastor Lloyd E. Russell, the work began to experience tremendous growth. With a membership of eleven (11), offices were instituted and officers appointed in the areas such as Sunday school, Women’s, Men’s and Youth departments. Membership grew fast as under the inspiration of the Holy Spirit, Pastor Russell and his enthusiastic members echoed the sound of Pentecost throughout Hartford and its suburbs.
On the morning of the first church service, we had a glorious time fellow shipping and praising the Lord. That night, however, we were unable to return to the YWCA, because we were short on funds. The book of Nehemiah tells of a people with a mind to build despite oppositions and fears of confrontation from those who did not want to see the walls rebuilt. PTA members likewise pressed on amidst adversities. Just as Nehemiah persevered because he knew God had sent him to do this task, PTA persevered.

YMCA Hartford, CT
﻿       The YMCA was our next affordable meeting place that night, and did we have a time in God! Realizing that the need was great, Pastor Russell sought other places convenient and accommodating to hold services. As we prayed, the Lord provided a place at 1229 Albany Avenue the following Sunday.﻿ 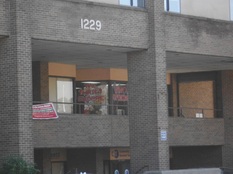 Collin Bennett Bldg 1229 Albany Ave, Htfd CT
﻿     Once again, it was time to relocate as the congregation grew rapidly; outgrowing 1229 Albany Avenue. The PTA family’s next move was to 110 Walnut Street, also in Hartford. With a great responsibility placed on him, Pastor Russell with his on going responsiveness procured usage of Walnut Street.﻿ 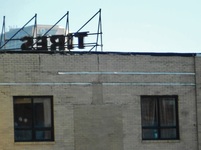 This unfolding vision was realized in eight years. Eight years of sacrifices, prayers and fasting came to fruition on August 13, 1999 at 249-265 Newfield Avenue. We assembled ourselves together on this spot of ground to give God thanks for His manifold blessings. We can truly say that we have come this far by faith leaning on the Lord knowing that He has never failed us and never will. Before the procurement of this building, our pastor would drive by, stop in faith believing, and give God glory and praise for this place. He never doubted that God would come through for us. He always tells us, “just tell the Lord thanks.” As a group, we made our first visit to view the property one Saturday morning.  After walking around, with hands clasp together in unity, we sang and gave thanks to the Lord Jesus Christ.

The Pentecostal Tabernacle Church family borrows the words of the song, “through many dangers toils and snares we have already come. It was grace that brought us safe this far and grace will lead us home”. Like Abraham, instructed by God to leave the confines of his home not knowing where he was going. Our Pastor, Bishop Russell followed the same instructions, not knowing where he was going or how he was going to do it. Because of trust, obedience and faithfulness the vision that was given to Bishop Russell for Pentecostal Tabernacle is now a reality. To God be the glory for the things He hath done.

﻿        Today, our beloved Pastor, Bishop Dr. Lloyd E. Russell and the congregation continue to worship at 249-265 Newfield Avenue in Hartford, CT, and continue to teach that Jesus Christ is both God and man.  He is the one true God who revealed Himself in the Old Testament as Jehovah and also revealed himself in His Son, Jesus Christ.

Pentecostal Tabernacle continues to grow from strength to strength.  With a strong and dedicated leader who totally depends on Jesus Christ and who is faithful and obedient to His call, we will continue the job that Jesus has left the church to do – that is – to make disciples and complete the ‘making of man.’﻿